Isabel I of Castile

$6.95
SKU
DIG1703
DIG March 2017. Did you know that Queen Isabel declared herself queen of her own kingdom, chose her own husband, united Spain, and established it as a global power?
Skip to the end of the images gallery 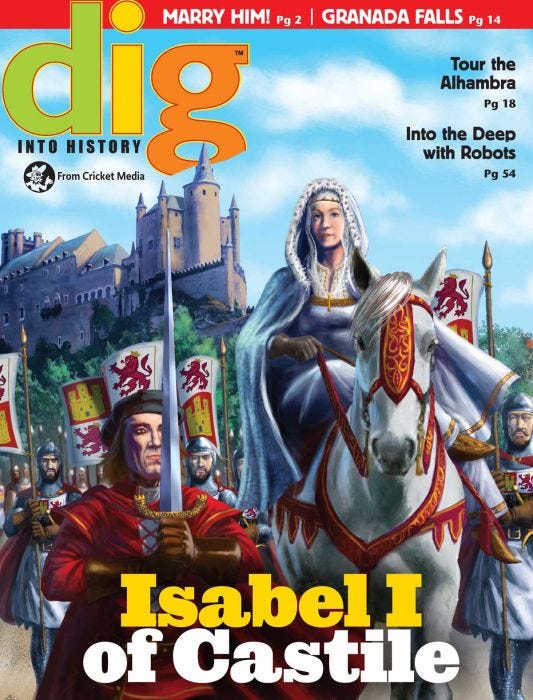 In 1492, Columbus sailed the ocean blue, funded by Ferdinand and Isabel of Spain. Every child learns that story in school. But did you know that Queen Isabel declared herself queen of her own kingdom, chose her own husband, united Spain, and established it as a global power? However, Isabel’s glory came at a horrifying price. Her reign unleashed the Spanish Inquisition and shattered the centuries-long coexistence of Christian, Muslim, and Jewish people in Spain. This month’s issue of DIG follows the complex, crafty Queen of Castile who changed the world—for better and worse.

Dive into the intrigue of royal marriage and succession, visit the gorgeous Alhambra palace of Granada, and meet other powerful Spanish queens. Then, plumb the depths of the sea in this month’s Let’s Go Digging section! Join the search for Columbus’ lost ships and discover more shipwrecks! And don’t miss the mortifying mistake featured on a postage stamp!

Explore the Age of Exploration with these fascinating articles:

“Not All Was Bliss!” by Barbara F. Weissberger

“Determined to Succeed” by Charles Beem

“To The East!” by Cristina Giardiola-Griffiths

“Love and Family” by Charles Beem

“Her Will” by Theresa Earenfight

“The Alhambra” by Maria Judith Feliciano

“A Search that Continues” by Toni Carell

“Into the Deep with Robots” by Matthew Lawrence

Regular features include Five Facts, Maps, The Calliope Chronicles, Fun With Words, Interestingly…, What’s Wrong Here?, Ask Away!, This & That, Off The Shelf/ On the Net, In the Headlines, The Adventures of Dr. Dig, Eagle Eye, and Artifacts.