$6.95
SKU
DIG1709
Ambition, intrigue, political assassination, a refugee crisis—the action-packed Ramses III issue of DIG has it all.
Skip to the end of the images gallery 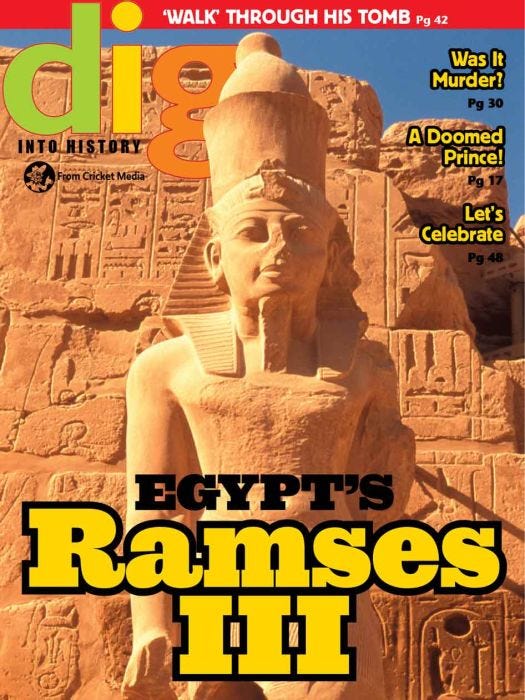 
Ambition, intrigue, political assassination, a refugee crisis—the action-packed Ramses III issue of DIG has it all. Ramses is thought of as Egypt’s last truly great pharaoh, and he ascended to the throne at a time of great turmoil. He weathered invasion, the world’s first recorded worker’s strike, and an influx of foreigners, but couldn’t survive a murder plot at the hands of the women in his own harem! Visit the pharaoh’s magnificent temple and examine his mummy. Don’t miss the Tale of the Doomed Prince, a short story that has survived since Ramses’ day—except for the ending. This month’s shocking and mysterious articles include:

“Peace Reigns” by Angela Murock Hussein
“Problems to the East” by Justin D. Lyons
“Problems to the West” by Justin D. Lyons
“On Strike!” by Angela Murock Hussein
“Papyrus Tales” by Julia Troche
“Magnificence at Medinet Habu” by Paul T. Nicholson
“Mayhem in the Palace” by Susan Redford
“A Mystery Solved” by Salima Ikram
“The Successors” by Louise Chipley Slavicek

The “Let’s Go Digging” section delves deep into Ramses’ tomb in the Valley of the Kings. Its walls are decorated with paintings unlike any other—maybe as a form of magic spell to protect him from robbers in the afterlife! Learn about Egyptian names and hieroglyphics and celebrate at an ancient festival!
“Recording the Art”
“A Walk Through KV 11” by Salima Ikram
“Let’s Celebrate!” by David Pepper
“What’s In a Name?” by David Pepper
“Reading Hieroglyphs” by David Pepper

Regular features include Five Facts/Map, Fun With Words, The Calliope Chronicles, Fast Forward, Tales It Is!, Interestingly…, Ask Away, This & That, Off the Shelf/ On the Net, The Adventures of Dr. Dig, In the Headlines, and Artifacts.