$6.95
SKU
DIG1705
DIG May/June 2017. A fiery orator who opposed a tyrannical king and demanded liberty or death… wait, are we talking about Demosthenes or Cicero or Patrick Henry?
Skip to the end of the images gallery 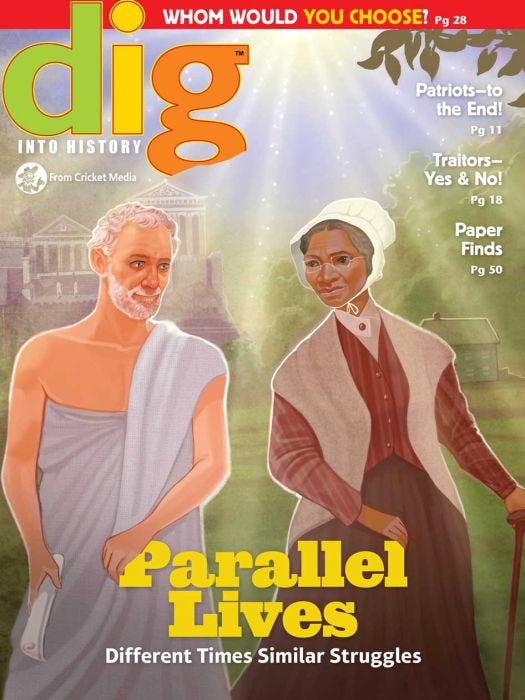 A fiery orator who opposed a tyrannical king and demanded liberty or death… wait, are we talking about Demosthenes or Cicero or Patrick Henry? The ancient Roman biographer Plutarch profiled great figures in Greek and Roman history in pairs to show how people in different times acted in similar circumstances.

This thought-provoking new issue of DIG takes Plutarch’s parallel lives from ancient history to the present, with famous figures from Aaron Burr to Sojourner Truth. Plutarch’s Lives made a big splash that has rippled throughout time—Shakespeare based his Roman plays on Plutarch, George Washington used his Life of Cato to boost his troops’ morale, and you might even recognize a reference to his name in The Hunger Games!

“Socrates and Confucius” by Regina Hansen


The “Let’s Go Digging Section” focuses on ancient writing and what archaeologists can learn from it. Explore ruined libraries, get a glimpse of Roman graffiti, and pore over thousand-year-old texts!


Regular features include Maps, Fun With Words, The Calliope Chronicles, Interestingly, Fast Forward, What’s Wrong Here, Ask Away!, This & That, Off the Shelf/On the Net, In the Headlines, The Adventures of Dr. Dig, and Artifacts.