WHAT'S UP WITH ECLIPSES?

$6.95
SKU
DIG1701
DIG January 2017. Since the dawn of civilization, people have marveled at eclipses and wondered how to predict them and what they meant. Learn about how early astronomers documented eclipses in Babylon, ancient Greece, the Mayan Empire, Revolutionary America,
Skip to the end of the images gallery 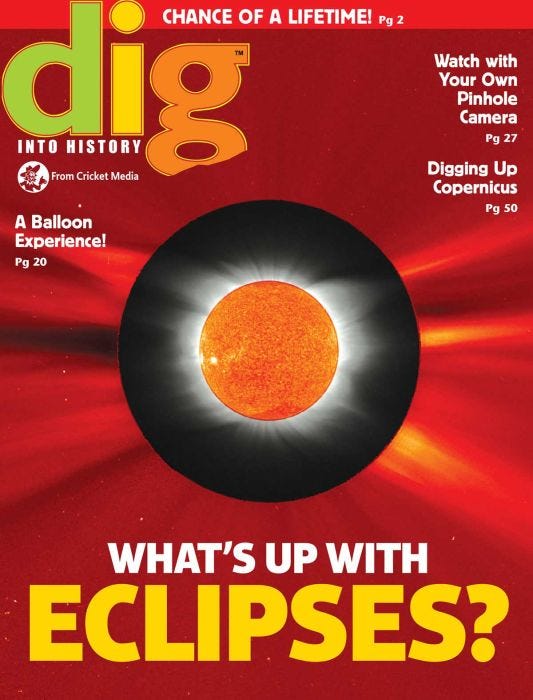 Quick, what are you doing on August 21, 2017? Don’t have any plans yet? Good. Save the date for the Great American Eclipse, an event that will change your perspective on our place in the universe! What better way to prepare than with this month’s issue of DIG? Since the dawn of civilization, people have marveled at eclipses and wondered how to predict them and what they meant. Learn about how early astronomers documented eclipses in Babylon, ancient Greece, the Mayan Empire, Revolutionary America, and… on board a hot air balloon? Then, follow modern-day scientists on their expeditions, and create your own pinhole camera to safely view the sun! This month’s stellar articles include:

Get Ready! By Michael Zeiler

The What and Why by Deborah Pasachoff

The Saros Cycle by Deborah Pasachoff

Onsite in the 7th Century B.C.E by William Sheehan

The Power of Prediction by Anthony Aveni

Up & Away! By Naomi Pasachoff

The ‘Let’s Go Dig-ging’ section features some of the most remarkable discoveries in astronomy, including an experiment that proved Einstein’s most famous theory was right! Examine the world’s oldest-known computer, the Antikythera Mechanism, which could calculate when eclipses took place. Why did famous astronomer Tycho Brache have a metal nose? How did archaeologists confirm that bones they found belonged to “the scientist who made the Earth a planet?” Find out in these articles:

Digging Up Copernicus by Naomi Pasachoff

Digging Up Tycho by Naomi Pasachoff

What Do You Think? By Naomi Pasachoff

Regular features include: Five Facts, the Calliope Chronicles, Fun with Words, Fast Forward, Interestingly…, What’s Wrong Here?, Ask Away!, This & That, Off the Shelf/ On the Net, the Adventures of Dr. Dig, and Artifacts.