BRAZIL: A Land Claimed By A Treaty

$6.95
SKU
DIG1704
This month's issue of DIG explores a country whose history is as complicated, colorful, and dangerous as the Amazon rainforest itself
Skip to the end of the images gallery 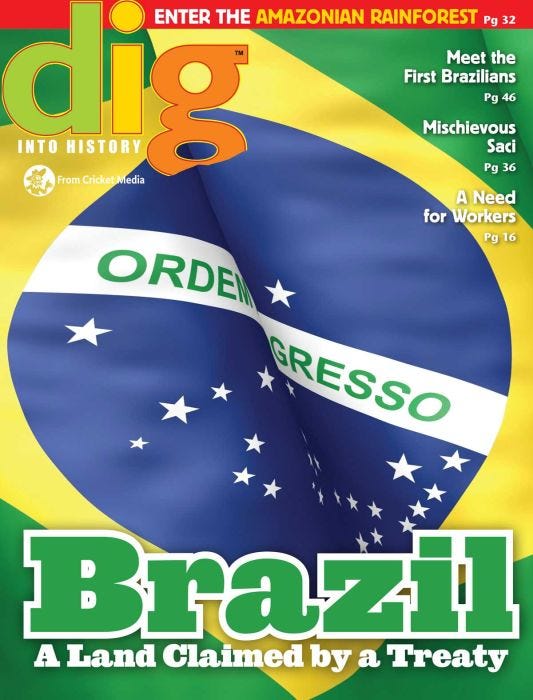 
Where did we get the word ‘potato?’ Why is silver associated with magic? Why is Brazil the only South American country whose official language is Portuguese? This month’s issue of DIG explores a country whose history is as complicated, colorful, and dangerous as the Amazon rainforest itself. Meet the indigenous people of Brazil and learn how their culture mingled with European and African traditions to birth the famous trickster figure Saci! Explore the troubling history of Brazilian sugar plantations, join the fight for independence, and more in these articles:

“The Discovery of Brazil” by Amelia Polonia

“Why Portugal?” by Amelia Polonia

“Let Me Introduce You” by Barbara A. Sommer

“A Need for Workers” by Roquinaldo Ferreira

“Colonial Amazonia” by Barbara A. Sommer

“A Kingdom in Brazil” by Judy Bieber

“The Amazonian Rainforest” by Fred Jackson

The “Let’s Go Digging” section features artifacts from some of the very first inhabitants of the Americas. Archaeologists have debated for years over how and when people first arrived in the in the Americas, and which settlements are the oldest. Learn about the startling discoveries that shed light on these ancient mysteries!

“The First Brazilians” by Mark Rose

“Mosaic of the Past” by Mark Rose

Regular features include Five Facts, Maps, The Calliope Chronicles, Interestingly, Fun with Words, What’s Wrong Here?, Fast Forward, Ask Away!, This & That, Off the Shelf/On the Net, In the Headlines, The Adventures of Dr. Dig, and Artifacts