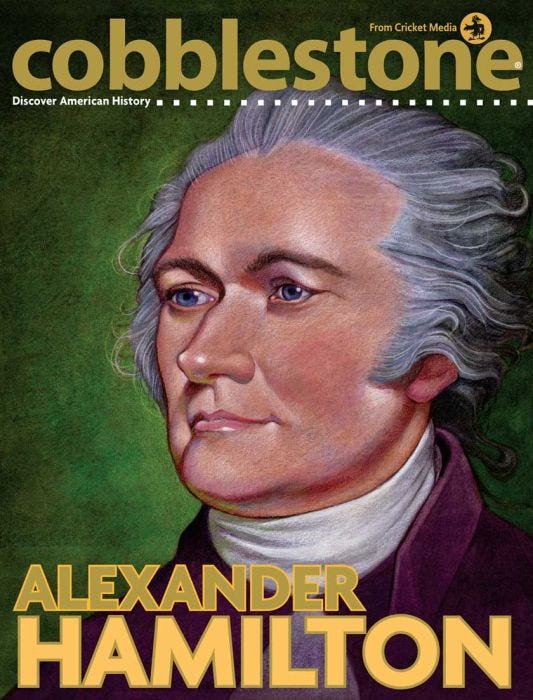 Have you been listening to the Hamilton cast-recording non-stop? Or have you ever wondered just what Alexander Hamilton did to get his face on your lunch money? Discover more about the ten-dollar founding father with this month’s special issue of COBBLESTONE, which explores the thrilling life and legacy of America’s first Secretary of the Treasury. From impoverished but determined orphan to distinguished military hero to controversial visionary, Hamilton’s surprising rise and fall is sure to fascinate. Read an exclusive interview with a star from the Broadway and Chicago productions of Hamilton, and enter COBBLESTONE’s “Rap Into History” contest!

Stepping Into Politics by Ruth Spencer Johnson, a three-act play that you can read with two friends

Guarding the Coast by Paul A. Powers

An Infamous Duel by Rowland W. Halliday and Andrew Matthews

A “Sweet Project” by Emily Goodman

HAMILTON On Stage! by Kathiann Kowalski

Regular features include: Did You Know? Going Global, Brain Tickets, Your Letters, Just For Fun, Dr. D’s Mystery Hero, Spotlight On…, Say What? And Cartoon Connection.