The United States and World War I 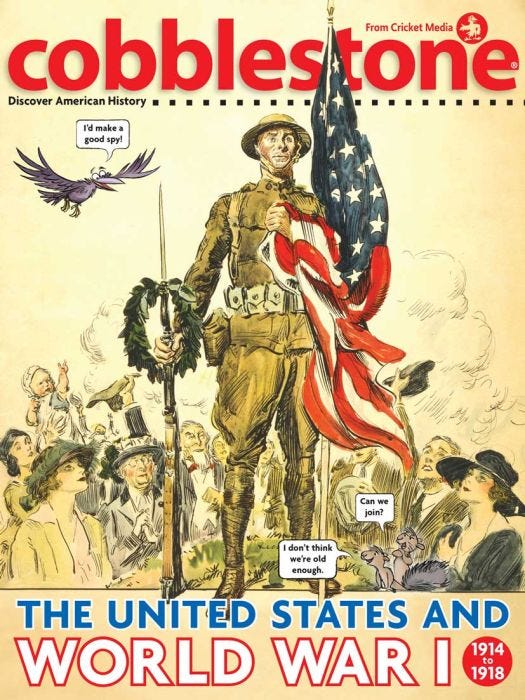 They called it “the war to end all wars.” With over 65 million soldiers from six continents fighting, World War I was like nothing the planet had ever seen before. But instead of ending all wars, it set the stage for a new era of warfare. This issue of COBBLESTONE takes readers through America’s role in the “Great War.”

Meet Jeanette Rankin, the first woman in Congress, who voted against both World Wars, and the brave Harlem Hellfighters, a regiment made up of African American soldiers. Get a glimpse into life on the front lines and the elite meetings of the Big Four. Did you know that on Christmas Day, both sides of the war held an informal truce to celebrate the holiday and even played soccer together? Or that a dog named Stubby was promoted to the rank of Sergeant for his bravery? Discover more in these articles:

“The Great War: An Overview” by Kathiann M. Kowalski

“Preparing to Fight” by Russ Chamberlayne

“The Final Push” by Andrew Matthews

“Great Facts About the Great War” by Meg Chorlian

“The Harlem Hellfighters” by Wynne Crombie

“Points for Peace” by Andrew Matthews

“A Deadly Flu” by Barbara Krasnre

“Maker of Masks” by Jacquie Sewell”

Regular features include Mapping It!, Did You Know?, Going Global, Freeze Frame, Your Letters, Just for Fun, Dr. D’s Mystery Hero, Spotlight On…, Say What?, and Cartoon Connection.