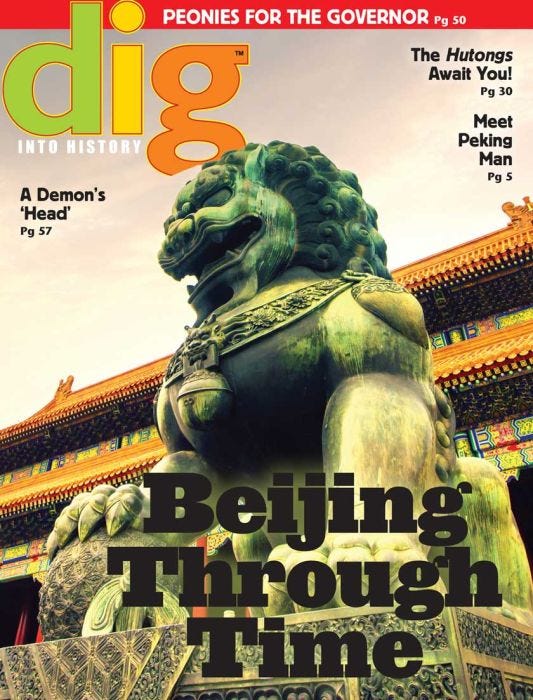 The world’s largest palace sprawls across Beijing, its many gates and walls designed to hide its secrets from the public. For over five centuries, they called it the “Forbidden City.” It is forbidden no longer, however, and you can visit it and the many other ancient wonders of Beijing in this month’s issue of DIG INTO HISTORY. From the Great Wall of China and the longest canal in the world to spectacular temples and palaces to the lavish tombs of emperors, the city is packed with awe-inspiring sites. Read about the discovery of one of the ‘missing links’ in our evolutionary chain, see the soaring skyscrapers and historic villages of the modern city, and more in articles such as:

One of the Great Four by Monique Nagel-Angermann

The Grand Canal by Patrick Wertmann

The Great Wall by Monique Nagel-Angermann

A Masterpiece in Design by Margarete Pruech

The Forbidden City by Annette Kieser

The 13 Tombs of the Ming Dynasty by Patrick Wertmann

Peonies for the Governor by Margarete Pruech

Regular features include: The Calliope Chronicles, Fun with Words, Fast Forawrd, Interestingly…, What’s Wrong Here?, Ask Away!, This & That, Off the Shelf/On the Net, The Adventures of Dr. Dig, In the Headlines, and Artifacts