Lift off with a boy facing a flying test, a girl who lived with robots, and two readers who meet in the pages of each other’s books. Anything is possible in the pages of September's CRICKET! 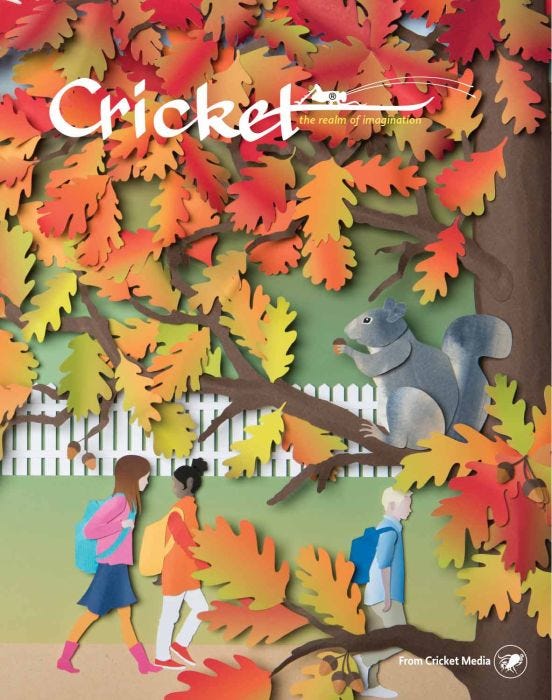 
Lift off with a boy facing a flying test, a girl who lived with robots, and two readers who meet in the pages of each other’s books. Anything is possible in the pages of September's CRICKET!


Just ask Robert Goddard, the boy who dreamed about spaceships and grew up to become one of the first rocket scientists! At a time when primitive rockets were used only for fireworks or weapons, Goddard foresaw how they might make possible space travel. Joseph Taylor’s true account, “Launching Rockets: The Story of Robert H. Goddard,” follows Goddard’s stunning career.


It’s September 20, 3012. In top news this morning, famous astronaut Willis Everson returns to Earth after five years. And his twelve-year-old son, Antrik Everson, is taking his flying test. But will he pass? Find out in Sara Matson’s story, “The Flying Test,” illustrated by Martin Wickstrom.


Diana is not a robot. She is a human. And since her grandmother, mother, and sisters are all robots, that makes her unique. Don’t miss part one of “The Girl Who Lived with Robots” by Joanna Sisk-Purvis with art by Jeffrey Ebbeler—and see what happens when Diana meets another human girl.


In Joseph Yenkavich’s story, “Winning,” illustrated by Karen Donnelly, Tom nervously prepares for another rocket competition. He’s never lost before, but even the slightest error could put him in jeopardy. Tom soon realizes, however, that there might be more important things than winning every contest.


What if the main character from your favorite book was actually reading books about you? Angel receives a book called Finding Audrey for her birthday… but its princess heroine is reading a book called Finding Angel. Is it a coincidence, or something more?  Part 1 of “Between the Pages” by Kat Heckenback, illustrated by Ingrid Kallick, is a charming and suspenseful fantasy tale.


This issue also concludes Christy Lenzi’s western adventure, “The Bushwhackers.” Will Josey and Dora be safe from the gang of Missouri bushwhackers who have invaded their home—and will they ever see their trunk of special treasures again? There’s only one way to find out.