Enjoy tricks and treats with ghosts, gargoyles, robots, the legendary Monkey King, and a haunted basement in October's CRICKET! 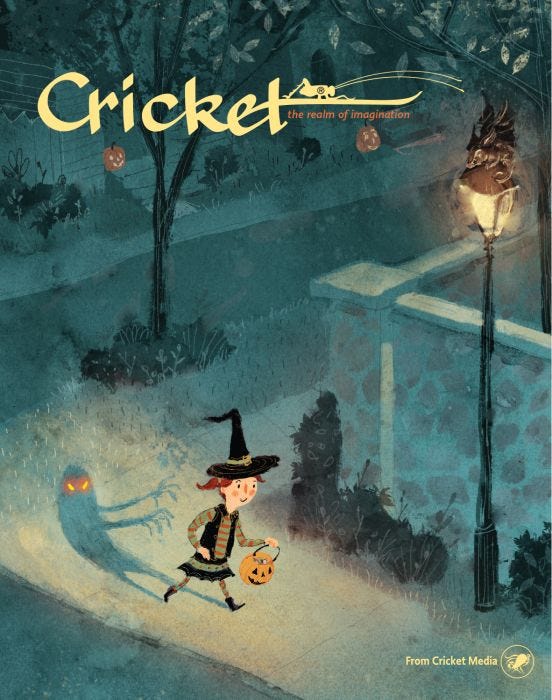 
Enjoy tricks and treats with ghosts, gargoyles, robots, the legendary Monkey King, and a haunted basement in October's CRICKET!


“The Weeping Lass at the Dancing Place” by Sorche Nic Leodhas, illustrated by Alan Marks, is the chilling story of a girl who can do nothing but weep for her drowned love, wishing for him to come back to her. She soon learns, however, to be careful what she wishes for.


When you get sick, your doctor probably listens to your heart with a stethoscope. Two hundred years ago, though, things weren’t quite so easy. See how a children’s game inspired Rene Laennec to invent the stethoscope in “Listening to the Body” by Tracey E. Fern, illustrated by Lars Leetaru.


In an excerpt from his award-winning graphic novel, AMERICAN BORN CHINESE, Gene Yang retells the classic Chinese legend of “The Monkey King.” King among all monkeys and blessed with the powers of a deity, the Monkey King feels he deserves an invitation to the gods’ party. Will he be allowed in?


The Bridgales left clear instructions when they hired Reuben to pet sit… except for that one strange sentence scrawled in wild cursive at the end of the letter: “Beware the mobster, the monster, and the monsieur.” What could that mean? Find out in “The House at the Edge of the Universe” by Ryan Kimble, illustrated by Anna Bron.


When Angel received a book called Finding Audrey for her birthday, she had no idea that in another world, Princess Audrey was reading a book called Finding Angel. But now that the two girls have discovered how to talk to one another, something has gone horribly wrong. Will they be able to bring Audrey’s gargoyle friend back to her world? Part 2 of “Between the Pages” is by Kat Heckenbach, with art by Ingrid Kallick.


This issue also concludes “The Girl Who Lived with Robots” by Joanna Sisk Purvis, illustrated by Jeffrey Ebbeler. Diana has lived her whole life without ever seeing another human. But now, she must choose between staying with the only family she’s ever known, or to go meet a family she’s never meet.