$6.95
SKU
CKT1611
CRICKET November-December 2016 single back issue.
Skip to the end of the images gallery 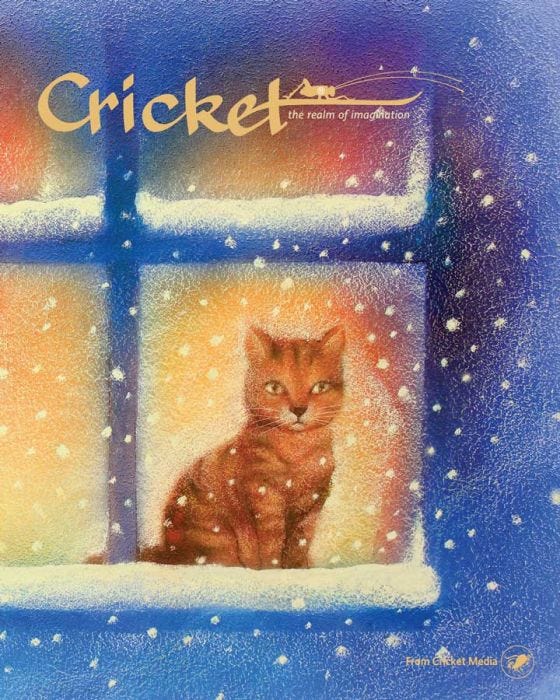 The November/December issue of CRICKET is full of wintery surprises. With enchanting poems and stories about things lost and found, you never know what you might discover.

When Nellie can’t stop grieving over her mother’s death, her Swedish grandmother gives her a bottle that comes with a moving story… and magical powers? Learn more about the mysteries of “The Swedish Bottle” in this haunting tale by Sue Cowing, art by Jui Ishida.

For four years, Nazis have occupied Theo’s small Holland town, turning his once peaceful neighborhood into a living nightmare. When he stumbles upon a particularly cruel German officer’s body, Theo decides to steal his medal as a trophy for his best friend, who has gone missing. Part one of “The Iron Cross” by Johnna Stein, with art by Adam Gustavson, will make readers’ hearts pound with suspense.

Gattone is nobody’s cat. He has no owner, no tags, and no home, and he likes it that way. But when he lashes out against the people who are trying to take care of him, he begins to worry about what will happen to him. Follow the biggest cat in New York City in part 1 of “Nobody’s Cat” by Fannie Peczenik, art by Cindy Revell.

In “Blossom Comes Home,” veterinarian James Herriot recalls his encounter with an elderly cow who loves her old owner so much that she makes an improbable journey home from her new farm. Art by Ruth Brown.

Can you imagine being kidnapped from the schoolyard at only five years old and forced into dangerous, often deadly, work? “The Climbing Boys” by James Cross Giblin depicts the shocking lives of chimney sweeps’ apprentices in 18th-century England.

King Fensgar is bored. Winters are long, dark, and lonely in his Northern kingdom, and nothing in his palace can amuse him anymore… until he discovers a telescope that lets him peer into in far-away kingdoms. Soon, Fensgar realizes that the more he gazes into the distance, the more he comes to love what’s right in front of him. Peer into “The Telescope” by Lisa Harries Schumann, with art by Bryn Barnard.

And if you’re still hungry for more, take a break and bake some delicious Christmas Morning Dutch Pancakes with a recipe by Emmillie Miller, art by Sara Franklin.

“All You Need” by Howard Schwartz, art by Kristina Swarner

“Giles at 14” by Diane de Anda, art by Yelena Bryksenkova