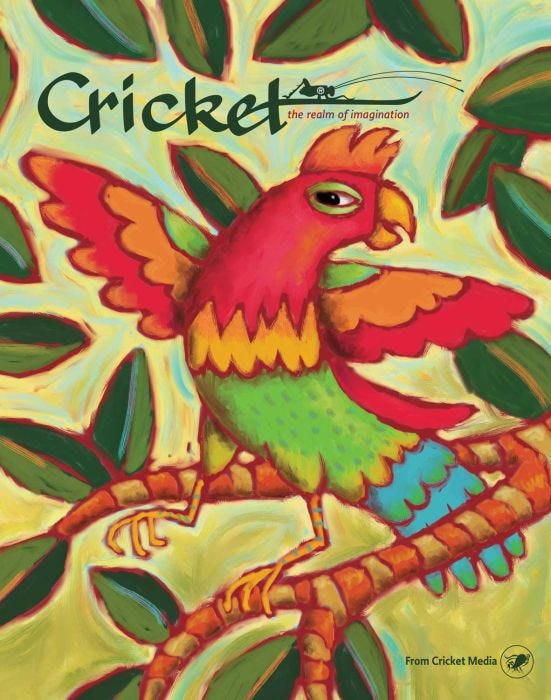 Let your imagination soar! This month’s issue of CRICKET takes flight with escaped parrots, flying kings, and a spaceship!

When new neighbors from Kenya move next door, Seth is excited to meet their pet parrot, Asha. He quickly learns, however, that a bird as smart as Asha can be difficult to keep an eye on. This is the first installment of “Asha, Bird of Hope” by Kimberly Long Cockroft, with art by Marta Antelo.

Kai Kaus, Shah of ancient Persia, is not remembered for being a great king. But he will long be remembered for his legendary flight… for better for worse. Marilyn Bolchunos retells a humorous Persian legend in “The King Who Wanted to Fly,” with art by Rupert Van Wyk.

In “A King’s Freedom,” Thavius J. Nelson tells the astonishing life of master bridge builder Horace King, a former slave who worked his way to freedom. One of his creations still stands in Woodbury, Georgia after 150 years. Have you ever seen it?

Boo has explored every nook and cranny of the spaceship where he’s spent all his life… except for the front of the ship. All of the doors leading to the bow of the ship have been sealed for centuries. But when he gets sucked into pipe of his ship’s water tank, he finds himself somewhere completely unfamiliar. Don’t miss Part 1 of of “Boo” by Tom Brennan, illustrated by Alan Fore!

Aaron Shepherd tells one of the most loved tales of the Mahabharata in “Savitra, Princess of India,” with beautiful art by Emma Shaw-Smith. Princess Savitra’s beloved husband is fated to die one year from their marriage, but she swears she’ll find a way to convince Yama, the God of Death, to spare her husband’s life, even if she has to trick him.

Mother’s Day is a cherished tradition in America, but it might not be as old as you think… and it hasn’t always been celebrated the same way! Read about the history of Mother’s Day in “The Mothers of Mother’s Day” by Sharon Montgomery.

This issue also concludes “April Rose in Charge” by Barbara Sinopoli, illustrated by Kyle Reed. Trying to herd sheep back to her family farm in the middle of a terrible storm, April Rose realizes that one lamb is missing. Can she get him back to safety in time

“The Umbrella” by D.E. Brigham, art by Linda Wingerter