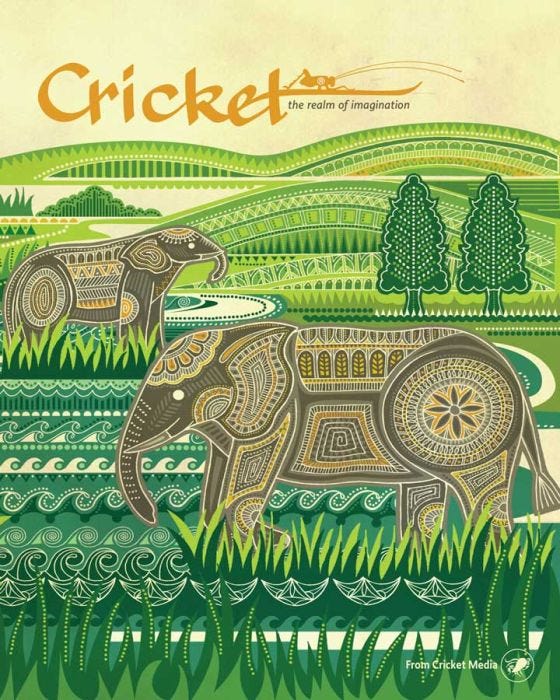 The world is full of music in this month’s tuneful Cricket.

Niccolo is technically gifted on the violin but has musical interests beyond what his parents can understand. See how he finds his musical passion in “World Music” by Donna Price, art by Marta Antelo.

When the Japanese invade Burma in World War II, Aung must flee with his elephant Bandoola. Follow their wartime escape adventure in part one of “The Elephant Song” by Pamela D. Gauci, art by Ying-Fang Shen.

After his father loses his hand during the D-Day Invasion, Lou takes him to a baseball game that features a most unusual and inspiring player, in “The Return of Sal Caputo” by Timothy Tocher, art by Christopher O’Leary.

Little brothers are bothers the world around. In Tehran, Farzin gets into a curious predicament after defending his younger brother from the neighborhood bully in “Omid and Me” by Sara Valafar, art by Nicholas Stevenson.

And in the dramatic conclusion of “The Forty Thieves,” clever Morgiana saves her master’s life and finds a home filled with magic for her and her brother. Story by Christy Lenzi, art by Anna Bron.

Kids continue to create the Kyngdom story from our online Chatterbox, the bugs form a band with only one really big, and ugly, fan, and there’s a new poetry contest about music. All in this month’s Cricket. It’s as easy as do re mi.