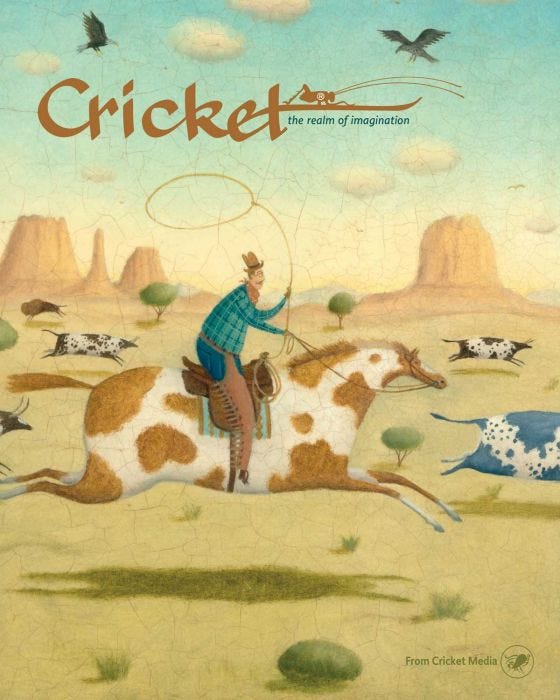 When you dream big, wild horses can’t hold you back! This month’s issue of CRICKET is packed with stories of wishes and whimsy, hopes and dreams, and a little luck of the Irish.

When Alex blows out the candles on her birthday cake, she knows that her three wishes can’t possibly come true. Her grandma won’t get her the video game she wants, her father is stranded at the airport… might as well use her third wish on a pet triceratops. Impossible, right? But what’s that strange noise in the backyard? Find out in “Wishin’ Impossible” by Pamela Love, with art by Katie Turner.

Percy Plumb has always wanted to be a cowboy. Instead, he’s a librarian. But when he sees a flier on the library wall for a horse in need of a home, Percy sees a change to make his lifelong dream come true. Read more in part one of “Percy Plumb, Cowboy” by Sue Anderson, art by Michael Chesworth.

Did you know that knights’ horses wore armor, too? Learn the names of the different pieces! “Born to Fight,” by Constance Rutherford with art by Ivetta Fedorova, follows a medieval charger from birth to its debut on the field, proudly carrying a knight into battle. Linger in the middle ages and pay a visit to the gargoyles. Why are these hideous heads mounted on cathedrals? Read all about this strange tradition in “Stony Faces” by Anne Renaud.

Enjoy a classic Norwegian fairy tale, “Utrøst, the Land Under Sea,” as retold by Lance Nixon and illustrated by Olwyn Whelan. Isak is a poor fisherman who hardly ever catches anything. His neighbors warn him that the three cormorants that follow his ship can only bode ill fortune. But when Isak finds himself caught in a storm, he finds help from surprising friends and discovers a miraculous land under the sea.

April Rose is twelve years old and knows pretty much everything. Taking care of the family’s farm should be a piece of cake. When the storm clouds roll in, though, April realizes that this job may be harder than she thought. “April Rose In Charge,” by Barbara Sinopoli with art by Kyle Reed, will continue in the April issue of CRICKET!

Everyone’s heard of leprechauns, those crafty little men dressed in green who hoard pots of gold. But where did these stories begin? Read “The True Legend of the Leprechauns,” a fully fabricated fable by Elizabeth Keeler Robinson, with art by Rupert van Wyk. Enjoy some groanworthy St. Patrick’s Day jokes and try your hand at preparing Grandpa Corcoran’s Irish stew, a family recipe by Julia Mautino Messina.

Want to wash down that stew with a glass of fresh milk? You can thank Alice Evans for it. “Alice Evans’s Quest for Safe Milk,” by Gail Jarrow with art by Paine Proffitt, is the true story of a scientist who discovered that milk was making Americans sick—but nobody believed her for years!

Enter an art contest featuring horses, find book recommendations from your fellow CRICKET readers, and follow Ladybug as she lays a clever trap to catch a leprechaun and his pot of gold!