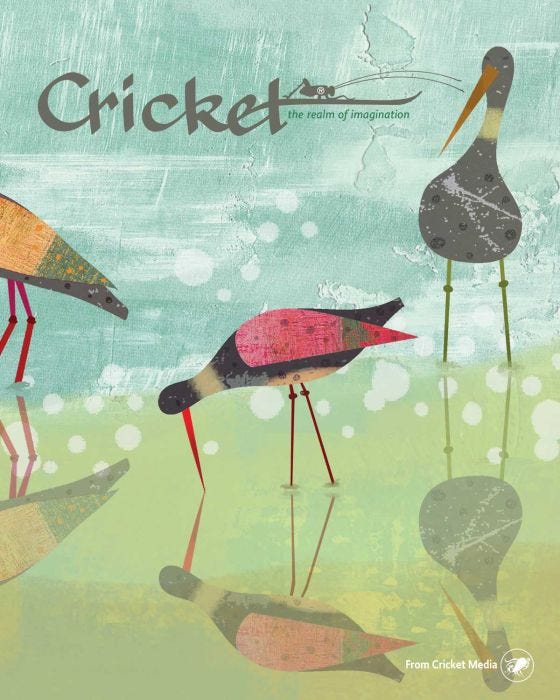 You’ve got it made in the shade with this summery Cricket.

Summer’s a great time for riding bikes, going on a hike, taking a swim, or enjoying a family barbecue.

“Wheels for the Dragon” tells the story of how the young emperor of China rode one of his country’s first bicycles.

A hike in a national park is a great adventure, unless you run into bears and lions. See how a new older brother becomes a hero to his little sister in “Natural Instincts.”

The neighbors next-door raise a lot of eyebrows when it turns out that they’re . . .  human! Enjoy the fun when dragon meets girl in “There Goes the Neighborhood.”

In the true story “Annette the Mermaid,” a young girl in Australia overcomes a crippling childhood disease to become a champion swimmer and movie star—and inventor of the first modern swimsuit for women.

Swedish immigrants to the Kansas prairie didn’t build homes, they dug them, as you’ll learn in “A Home in the Ground.” And if you like dirt, you’ll be fascinated by an activity for making your own shiny mud balls!

All this, plus the concluding episode of “Elephant Song,” a new art contest, and the wilderness adventures of Ladybug as she joins the buggy scouts.