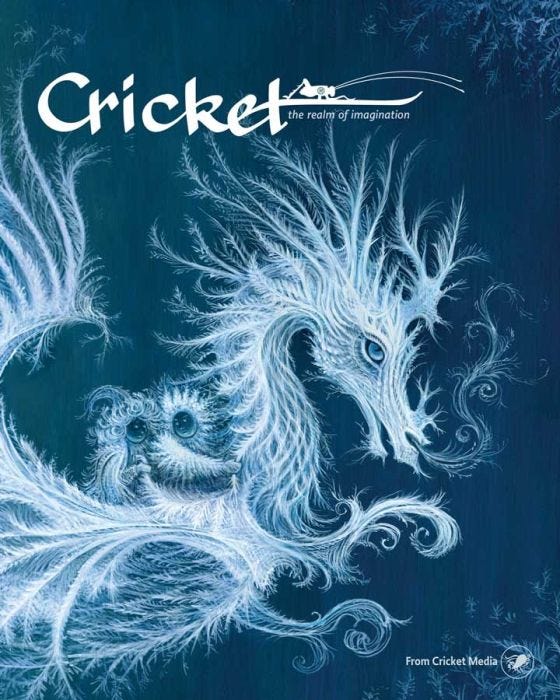 Can you imagine going for weeks without seeing the sun? For people who live near the North Pole, January means darkness all day long! Fortunately, they know how to pass the time while cooped up indoors: snuggled up and sharing a good story. This month’s issue of CRICKET is a journey through the ancient traditions of Northern Europe, from Norse myths to Finnish folktales.

Fauna has always wanted a pet. Anything would do—a cat, a dog, a fish like her father’s, or even a unicorn or a dragon! “Animal Magnet” by Quillon Dayton, with art by Sue Blanchard, is a funny and magical story about a girl who always seems to stumble across the strangest creatures.

Mary Flock Lempa beautifully retells The Kalevala, the national epic of Finland, in “Aino, Child of the Sea.” Aino is an adventurous young girl whose mother only seems to care for her vain and spoiled brother, Youkahainen. When Youkahainen runs into some trouble with a wizard, he foolishly offers his sister to him as a bride. But how will Aino escape his clutches? You will have to wait until February’s issue of CRICKET to read Part 2 of the story!

The Frost King has stolen Thor’s hammer, and the thunder god is furious! Fortunately, his brother, Loki the Clever, has devised a plan to get it back—but it involves disguising Thor as a lovely bride! “Thor, the Frost King’s Bride” is L.E. Erickson hilarious adaptation of a story from the Poetic Edda with art by Glen Angus.

Have you ever heard of the letter “Yogh?” What about “Thorn?” Those are just a few of the old-fashioned symbols that no longer appear in our alphabet. Learn more about these “Vanished Letters” in Joseph Pentangelo’s article, then carve your own rune stones!

When we last left “Nobody’s Cat,” Gattone the independent tomcat was worrying about what would happen to him now that he’s bitten and scratched the people who cared for him. Now, he’s resolved to be a good cat and is sharing his kibble with the neighborhood animals. But one night, he finds a new visitor to his food bowl. Read the next installment of Fannie Peczenik’s story, with art by Cindy Revell.

This issue also continues Johnna Stein’s suspenseful story, “The Iron Cross,” illustrated by Adam Gustavson. Now that the Nazis have occupied Theo’s once-peaceful Holland town, the smallest actions could have dangerous consequences. Having recently stolen a medal from the body of a particularly awful German soldier, he now learns that he’s not the only member of his family hiding something from the Nazis. Theo joins father’s secret mission… but will the Nazis catch them in the act?

For more about double-crossing the Nazis, check out Tracey E. Fern’s amazing true story, “The Magician, The Spy, and the Mosquito,” with pictures by Lynette Hemmant. Sometimes, heroes come from the unlikeliest of places—but who would have expected a stage magician and a burglar to help the Allies win World War II? Meet Jasper Maskelyne and Eddie Chapman, who pulled off possibly the most important magic trick of all time.