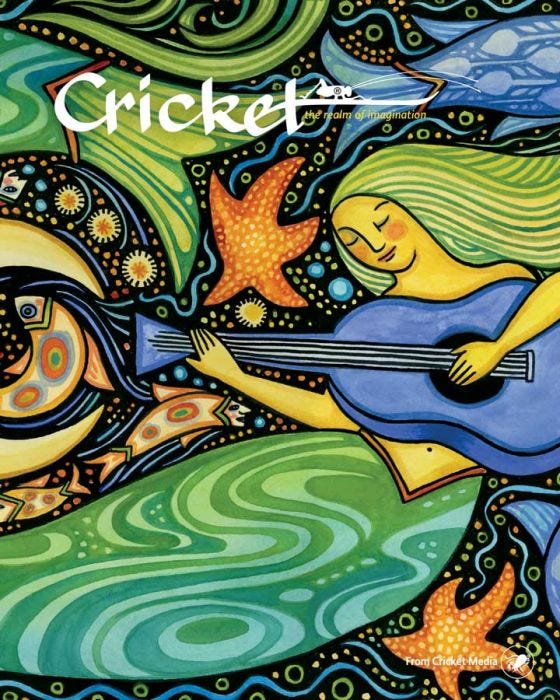 Who knows what hidden secrets may lurk in the depths of the ocean? But what washes out to sea often comes back in with the tide. Discover a surprising collection of tales from the sea in this month’s issue of CRICKET. Remember to stay on your guard—here there be dragons!

Adel loves nothing more than the cove where she lives with her family, but when she meets a young man who wishes to marry her, she must choose between him and her home.  Hannah Hoffman spins an original myth in “Adel of Acadia,” with art by Ingrid Kallick.

Obedient dogs learn to follow their master’s commands, but what happens when a dog only responds to “sailor talk?” You’ll be sure to pick up some new nautical lingo with “Charlie Noble and Mate” by Louis Arthur Norton, illustrated by Stacy Innerst.

Part 1 of the Finnish legend, “Aino, Child of the Sea” ended with a cliffhanger—or rather, a cliff-jumper! When we last saw her, Aino had leapt into the sea to avoid the sorcerer Vainamoinen, to whom her foolish brother had promised her as a bride. Now, Aino’s brother Youkahainen swears vengeance on the sorcerer and teams up with the old witch, Louhi. Read the surprising end to their story in Part 2 of S.A. Ulrich’s adaptation of The Kalevala, with art by Mary Flock Lempa.

This issue also concludes “Nobody’s Cat” by Fannie Paczenik, the story of an independent city cat who learns to accept a loving family of his own.

Everyone knows that every child gets chosen by a dragon at the age of ten. Mikoto’s father’s dragon was red and found in the fireplace, and her mother’s was blue and found in the river. But what kind of dragon will find Mikoto? Find out in “Shades of Dragons” by Kate Myers with art by Marie Rose Boisson, a beautiful story about belonging to two cultures.

“What will become of me?” sobs seven-year-old Sarah Breedlove, recently orphaned and living in poverty in the Louisiana delta. Little does she know that she will become a millionaire businesswoman and one of the most famous black women in American history! Read her amazing true story in “Madam C.J. Walker” by Robin Spevacek, illustrated by Tim Foley.

Finally, don’t miss the last installment of “The Iron Cross” by Johnna Stein, illustrated by Adam Gustavson. Theo has just joined his father on a secret mission to feed his fellow Dutch citizens, suffering under Nazi rule. But when the Allies arrive to end Nazi occupation, Theo learns some surprising lessons about true bravery.

Poetry in this issue:

“The Breeze” by Robert Schechter