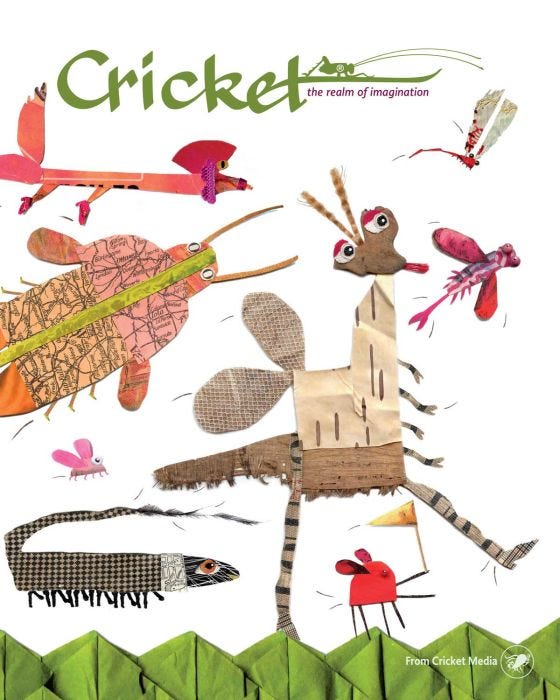 CRICKET magazine has gone buggy! From crunchy crickets to spinning spiders, there is something for everybuggy this April. Grab a magazine and escape from wicked weather, a plague of locusts, the Portuguese Inquisition, or just your everyday routine.

Felipe’s life is full of secrets. His family conceals a secret scroll under a tile by their door. His priest gives him a secret letter in exchange for a basket of lemons. He even has a secret name that he must only use inside his home. But why can his family only practice their culture and faith behind closed doors? Read his story in “The Inside Name” by Randi Sonenshine, with art by Leonid Gore.

When Murik helps a mysterious man, he is rewarded with a tattered, empty sack. But this is no ordinary sack—it can take him anywhere in the world that he wishes to go. When a mouse steals his sack, however, he must think like a rodent to get it back. “Murik and the Magic Sack” is a charming fairy tale written by Frederic S. Durbin and illustrated by Andrew Portwood.

Scanning the sky, Tom sees a mysterious dark cloud forming on the horizon. As it comes closer, he realizes, it’s no cloud: it’s a swarm of grasshoppers blanketing the prairie. “The Great Grasshopper Mystery,” by Sally Lee with art by Lori McElrath-Eslick, tells the startling true story of the plague of locusts that hit the Great Plains in the 1870’s.

Care to eat some crickets while you read CRICKET? You can find bugs on the menu in countries all around the world… and they may be on the menu on Mars one day! Read more in “Fried Crickets, Anyone?” by Pam Bailes.

In Josie Tagliente’s story “Ahimsa,” with art by Michael Chesworth, Lily tries to live without doing harm to any other living things. But when caterpillars begin to destroy her beloved grape plant, she realizes that this is easier said than done. Does she have to choose between harming the caterpillars and her plant, or is there another way to solve the problem?

When we last saw Percy Plumb, the mild-mannered librarian dreamed of becoming a cowboy, but never thought it could be possible. When he adopts a horse named Bob who is in need of a home, however, he realizes that his dreams can come true! Can Percy and Bob save the town from a herd of stampeding cattle? This issue concludes “Percy Plumb, Cowboy,” by Sue Anderson, illustrated by Michael Chesworth.

This issue also continues “April Rose in Charge” by Barbara Sinopoli, with art by Kyle Reed. Twelve-year-old April has been left to tend her family’s sheep farm by herself while her mother is away. When a big storm hits, however, what seemed like an easy job becomes much, much more dangerous.

Don’t forget to try some bugalicious party recipes with Cricket and company! (No real insects included.)

“Venice at Sunset” by Sandi Leibowitz

“If I Can Stop One Heart from Breaking” by Emily Dickinson