$6.95
SKU
CIC1709
Welcome, dear readers, to our Hauntings issue. Read on for rattling chains, flickers of movement in your peripheral vision, disembodied whispers, and the sound of footsteps in rooms that should be empty.
Skip to the end of the images gallery 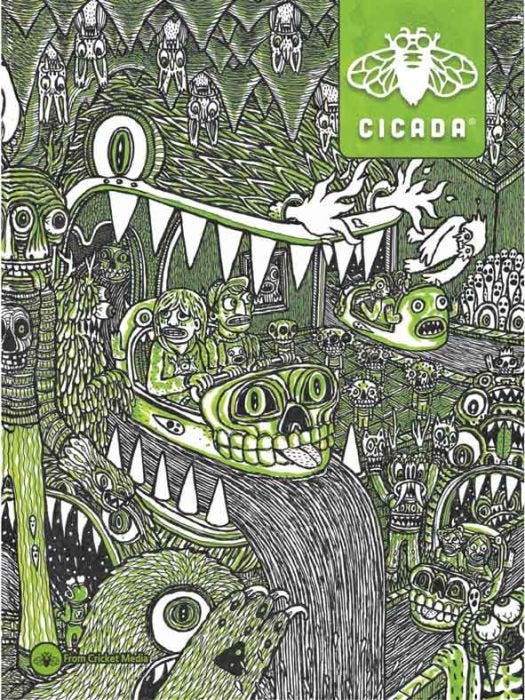 
Welcome, dear readers, to our Hauntings issue. Read on for rattling chains, flickers of movement in your peripheral vision, disembodied whispers, and the sound of footsteps in rooms that should be empty. Discover all this in the September/October issue of CICADA... if you dare!


There’s a poltergeist haunting Jeremy’s closet, messing with his clothes, but he has other things to worry about. Like the fact that he is rapidly falling in love with Merion. “A Silly Love Story” by Nino Cipri is a light and quirky modern romance that just happens to feature a monster or two.


“By fifteen years old, my body is a ghost town begging me to live in it,” writes Ashe Vernon in their essay, “Gender Performance.” This touching essay about Vernon’s lifelong experience with gender dysphoria follows a young person haunted by their own search for identity.


May Tenenbaum died at nineteen years old. A week later, her best friend Clarissa brought her back from the dead. That much, they both know. What will happen next for both of them? Where will May go? And why won’t Clarissa’s nose stop bleeding? Sarah Goldman’s eerie story, “Gravedigging,” is illustrated by Amrit Brar.


In Marianne Murphy’s short story, “Firefly Tree,” all of the fireflies in the neighborhood live in the same tree at the edge of the park. They say that if you touch the food that they keep hoarded in their tree, you can see a glimpse into your future… at your own risk.


And who put the dead lizard in Jason Joyce’s rubbish bin?


Poetry in this issue:

“For Anyone Who’s Listening” by Ashe Vernon

“Like the Swan Princess” by Kelsey Dean, art by Kaylani Juanita